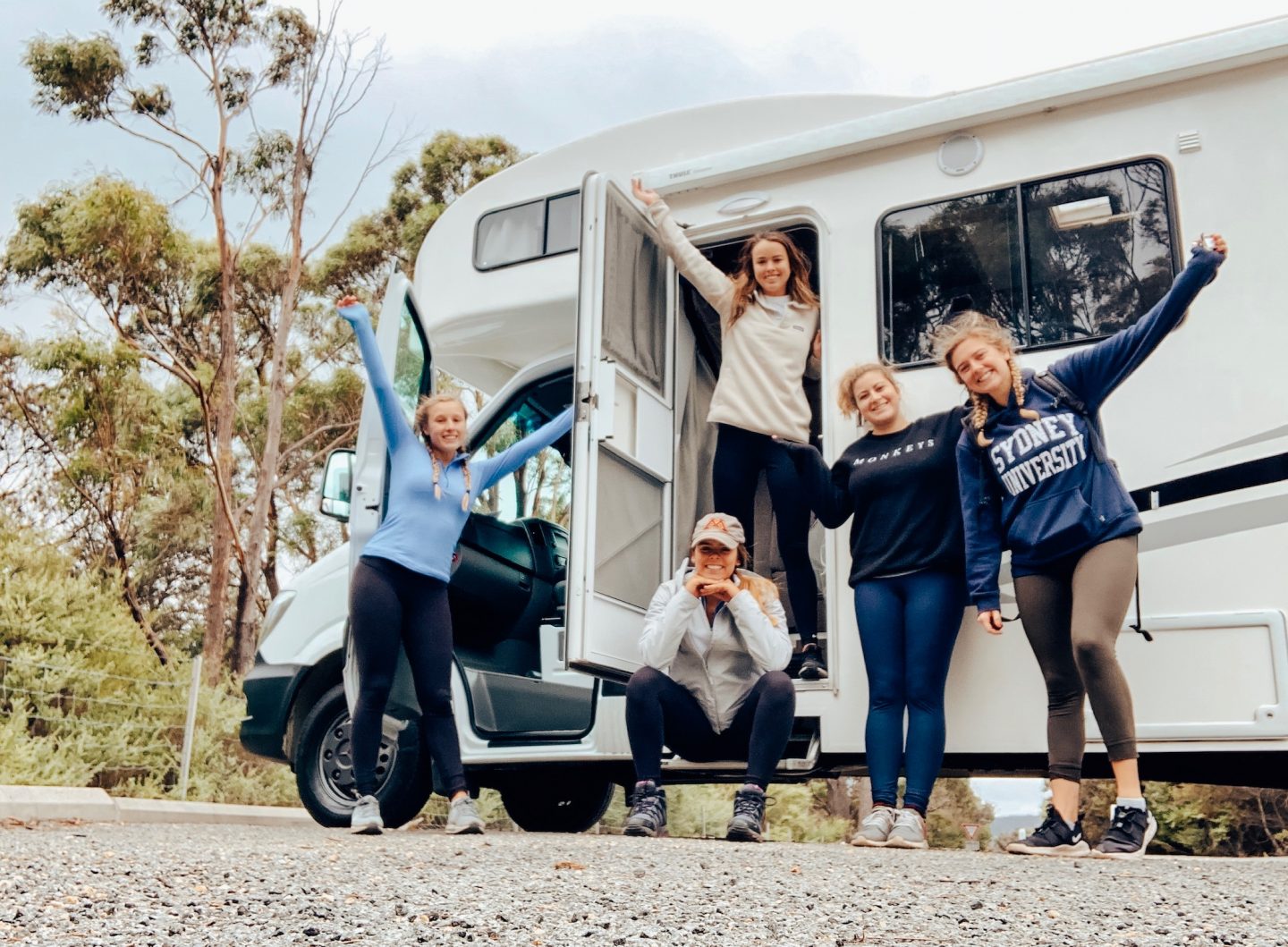 Our Tasmania road trip was my favorite trip during my time in Australia. Four friends and I flew 1.5 hours from Sydney to Hobart, Tasmania (the big island located off the southern coast of mainland Australia) and rented a camper van. Yup. A camper van. We had four days to explore Tasmania and hit the ground running right from the Apollo camper van office.

Our first stop was to a grocery store to pick up food followed by a visit to the MONA museum in Hobart. MONA stands for the Museum of Old and New Art and although none of us are huge museum goers, this place was incredible. Let me preface by saying that Ed Sheeran came to Tasmania solely to visit this museum during a trip to Australia. It’s that good. We had a great time checking out the various, very unique exhibits and bouncing on the outdoor trampoline!

From the museum we cruised to Eaglehawk Neck and checked out a local beach. Making our way southward we next stopped at Devil’s Kitchen, Tasman Arch, and the Blowhole to check out some more Tasman scenery. After all this, the sun was beginning to set so we drove to Port Arthur to check into our campsite. Once we were set up we decided to take advantage of our one night in Port Arthur and drove to the Port Arthur Historic Site.

Since we arrived late the site was closed for the day except for a nighttime ghost tour that was being offered! We learned all about the history of the site AND were able to go into some of the most haunted buildings in the world. On the tour, we visited a church, several homes, a prison, and a medical center. In the basement of the medical center we all stood around an old surgeon’s table in the pitch black and I swear I smelled blood. We did the entire tour in the dark which was so thrilling as this site is known for its negative energy.

I couldn’t take any photos because it was dark, but here’s what I learned:

Australia’s history is unique. Aside from the Aboriginals who have lived in Australia for centuries, the country was first colonized in the late 1700s by convicts who were sent from the UK to live and work in Australia. Port Arthur was one of the first sites that convicts arrived to (besides Sydney!). They built the historical site, including their own prison.

I learned that the prison was a silent prison that utilized sensory depravation as punishment. This means that for 24 hours each day there was no noise and when convicts were allowed out of their cells, they had to wear a bag over their heads so that they couldn’t see. As you can guess, many of the prisoners who lived here eventually went insane, and many took their own lives, which is part of the reason why this site is so haunted.

Another sad, but interesting fact is that Australia’s largest mass shooting occurred at this site in 1996. This shooting marked the illegality of guns in Australia.

Our tour ended with our guide telling us that it is common for visitors to leave the site feeling like a spirit is with them, and that if we experience this feeling for more than 24 hours we should return to the site for a cleansing. Not kidding. Luckily, I felt fine as we left the site and all of us had a great night around the campfire.

Today we drove back up to Hobart and did a wine tour! We got picked up in a small van and driven to six stops throughout the Huon Valley. Tasmania is known for its food and wine culture and this tour reflected that perfectly. We went to four wineries, a cidery for a flight of pear and apple deliciousness, and a cheesery for homemade cheese and crackers.

Aside from all this, we also had Huon Valley salmon for lunch, which to this day, is the best meal I’ve ever had. The salmon came with veggies and potatoes, and had a delicious herb butter melted on top of it…YUM. STILL NOT OVER IT.

We spent tonight hanging out at our campsite in Hobart making dinner together and watching movies in the megabed we made. We hadn’t checked our phones all night and had such a hard laugh when we saw that it was only 7:47 pm and we were all falling asleep to our second movie of the night! I guess that’s what happens when you spend a full day eating and drinking!

This morning we left Hobart and made our way north to the town of Richmond. We had a reservation to stay in Cole’s Bay this evening, but had no plans during the day. A local recommended the town of Richmond to us, so here we were! Richmond was so charming. The town housed Australia’s oldest Catholic Church and bridge- both built by convicts. Other than this, the town was filled with cafes, parks, and antique shops. We had a great morning exploring Richmond!

We ate lunch on the road and drove three hours north to Freycinet National Park. We arrived in the evening and had enough time to do a 1.5 hour hike before returning to our campsite in Cole’s Bay to cook dinner and relax. Tonight we had a lot of fun in the camper! A music video to Old Town Road may or may not have been made…

Our last day in Tasmania. We woke up bright and early (before sunrise early), made some delicious camper oatmeal, and drove to nearby Mt. Amos. We were told that this hike was extremely difficult, but arrived to the base at 7:30 am ready for a challenge! Little did we know we would spend the next 4 hours scaling cliffs…

This hike was no joke. The hiking trails took us up boulders and required both hands and feet to complete. We wouldn’t have known where the trail was without yellow arrows pointing us in the right direction. Every time I saw an arrow pointing up a cliff I asked myself, “This can NOT be it. How am I going to do this”?

This mental game continued for 3 straight hours as we worked our way up the mountain- some of us slipping, some of us crying, some of us wanting to turn around- all of us scared to death.

Getting to the top was my proudest accomplishments to date. This hike was as much of a mental challenge as it was physical and I couldn’t of done it without my friends. We enjoyed the view overlooking beautiful Winegalss Bay, listened to songs such as The Final Countdown to celebrate our victory, and began our descent back down. I was worried the way down would be worse because of the steepness, but we went really slow and even had some fun sliding down the rocks.

Day Four: Driving Back to Hobart

Once we reached the parking lot we did a massive group hug- I think I even kissed the camper van. The rest of the day was so much more relaxing- we cruised back to Hobart and enjoyed an early dinner on the harbor before flying back to Sydney.

As you can gather, this trip was quite the adventure. It was so different from any other trip I did and was SO budget friendly! I spent $30 on food for the four days! I think Tasmania is underrated and so worth the visit. We loved exploring in our camper van, and I look forward to the day that I get to ride in one again!