Home » Everything You Need To Know About Skydiving In Byron Bay 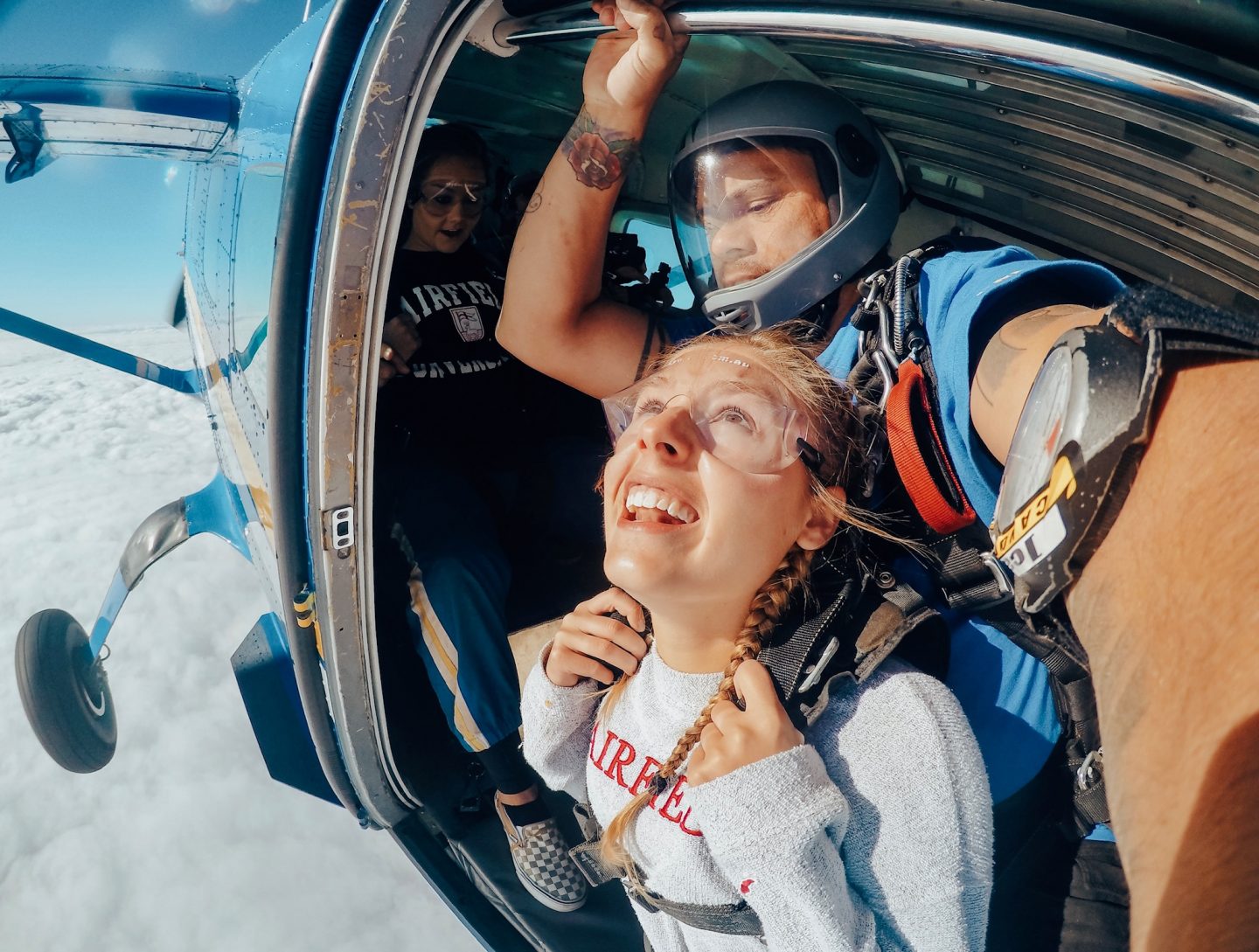 Have you ever wondered what it’s like to fall from the sky? Keep reading to find out what skydiving in Byron Bay is like!

My friends and I visited Byron Bay in May as the last stop on our Queensland/New South Wales weekend road trip, covering Sunshine Coast, Gold Coast, Brisbane, and Byron! We stayed at the Byron Bay YHA, which is in a central location and has a pool so I recommend it!

Byron Bay is one of the most famous surf spots in Australia. There are awesome beaches and a really cute downtown, complete with trendy boutiques and charming cafes. Aside from the beach and the town, there is the Cape Byron Lighthouse. We drove here to watch the sunset, but many people do the coastal walk up to the lighthouse. I definitely recommend this if you have time!

Skydiving in Byron Bay: The Training

Byron Bay is also the most famous place in Australia to skydive as you fall over beaches, the lighthouse, surrounding mountains, and coastal villages. We dove with Skydive Australia who picked us up and drove us to the office for pre-dive prep; this included about an hour’s worth of paperwork, safety briefings, and training. We learned how to “banana” in which we had to keep our chest out and our head and legs back behind us. This is the position you must hold as you dangle outside of the plane. We also practiced putting our legs up and out in front of us for the landing to ensure that we don’t break them. Other than this, the instructor does all the work.

Skydiving in Byron Bay: The Flight

Once we were suited up in our fun pants and parachutes we all boarded the small, metal, rickety airplane, each with a skydiver in tow, filming our every move on a GoPro. The plane ride was sketchy. We took off via a single, small turbine and were not seat belted. I was straddling a bench with my instructor behind me, trying to distract myself by asking him questions.

When we finally reached 15,000 feet it was go time! A light in front of me illuminated green and a loud, immensely terrifying horn sounded, signaling the metal garage-like door to slowly begin to open. As it opened a giant gust of wind came into the aircraft, shaking me to my core and rippling throughout my body. I got an adrenaline rush that began in my toes and slowly moved its way to my head. I was ready.

Skydiving in Byron Bay: The Freefall

I was the fourth person out of the plane. Two professional skydivers went first, followed by my friend Jaime. I had to watch her get sucked up by the wind as she screamed and tumbled into nonexistence. Before I even had a chance to absorb what I had just witnessed I was dangling outside of the plane myself.

My instructor pulled my forehead into his chest so that I was looking up. I never looked down. He pushed us out and we tumbled for what felt like 3 seconds, then he tapped my shoulder, instructing me to put my arms out and relax. I was free falling! And it wasn’t scary at all!

My instructor, KP, controlled us in the wind and put his GoPro in front of me for videos and pictures. I looked around and all I saw were clouds! We were so high up that I couldn’t even see the Earth, just what looked like a giant pillow below me. As we approached the clouds I squeezed my eyes shut, preparing for impact. I could tell the second we had broken through the cloud because I could feel freezing cold water hitting me at 120 mph. It felt like shards of glass on my body. This part was not enjoyable, but luckily only lasted for like 10 seconds then we broke through.

Just as we emerged, I looked down and could see Byron Bay below. We were rapidly approaching the ground when KP pulled the parachute and we shot up. This feeling was a blur and happened so fast. We spent the next 10 minutes slowly drifting down to Earth. I was finally able to catch my breath and let out a shriek of pure joy. KP let me control the parachute and I twirled us downwards, chatting the whole time. He pointed out various beaches and as we got closer to the ground, instructed me to put my legs up. I took position just like I was taught and came to an abrupt stop on the ground. He quickly unclipped me and gave me a huge high five.

As hard as I am trying to find the words to describe this experience, I will never be able to truly share what it felt like to fall from the sky. The 55 seconds that I was free falling felt like an eternity of sensory overload. When I landed I touched the ground with my hands, again feeling in control of my movement. I ran to my friend Jaime, who had also successfully landed, and gave her the biggest hug I think I’ve ever given anyone. I was on cloud nine.

Why YOU should go skydiving!

I think everyone should skydive in their lifetime. I HATE the feeling of my stomach dropping and could honestly not feel it at all. It’s really hard to describe the feeling of skydiving, but I didn’t feel like I was falling at 120 mph… it kind of felt like I just had a giant fan in my face, so strong that it caused my cheeks to flap in the wind!

Attached is my full skydiving video. Some clips of my face are quite embarrassing, but if you want to watch the full experience, here it is for your enjoyment:

“There’s zero fear. You realize that the point of maximum danger is the point of minimum fear. The lesson for me was why were you scared in your bed the night before? What do you need that fear for? Everything up to the stepping out, there’s actually no reason to be scared. And then in that moment, all of a sudden, where you should be terrified, is the most blissful experience of your life. God placed the best things in life on the other side of fear”. – Will Smith 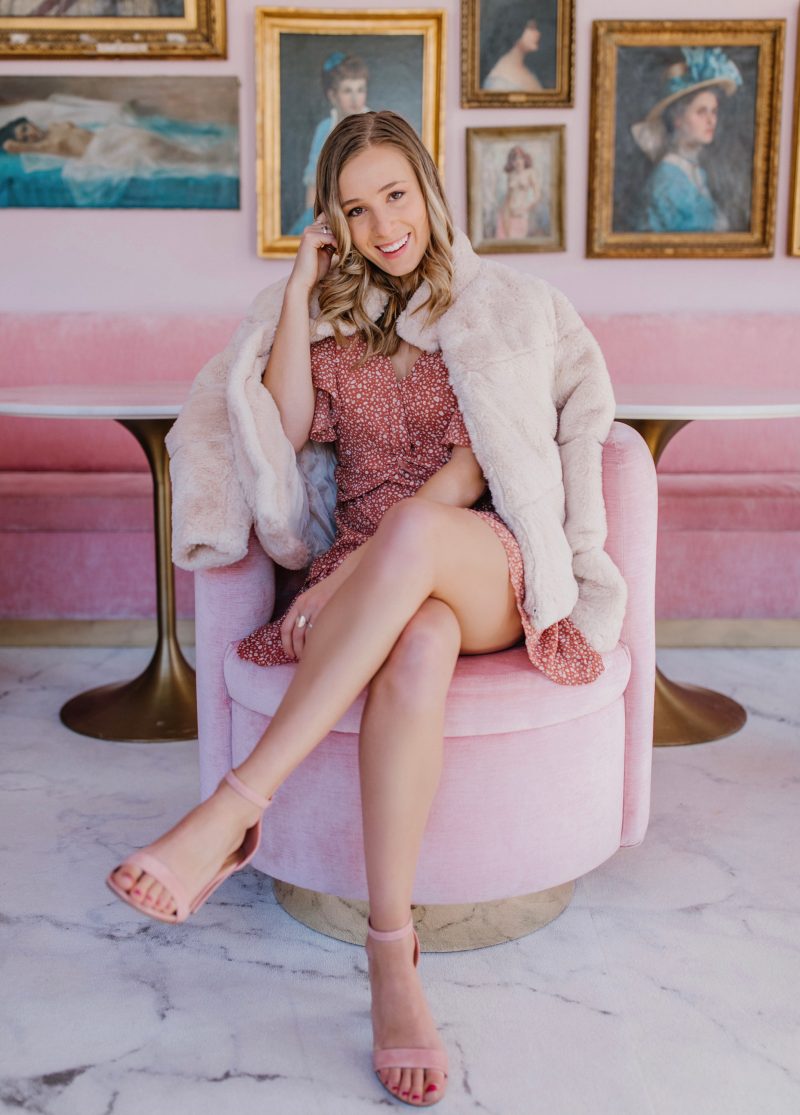